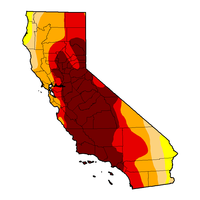 The U.S. Drought Monitor is jointly produced by the National Drought Mitigation Center at the University of Nebraska-Lincoln, the United States Department of Agriculture, and the National Oceanic and Atmospheric Administration. Map courtesy of NDMC-UNL.

California reduced its water consumption only 18% compared to December of 2013, seven points short of the 25% reduction goal, according to ABC news.

On the other hand, ABC news also reports that personal water use in the state dropped from 76 galleons in November to 67 in December, an impressive reduction in water consumption.

According to the EPA, choosing a WaterSense certified faucet attachment or shower head can reduce your water annual water consumption by as much as 3,500 galleons per year, without significantly reducing the performance of your faucet and shower.  Make WaterSense certified fixtures part of your strategy to meet conservation goals and protect our vital natural resources.