Enviro News: A Tale of Two Communities in the California Drought 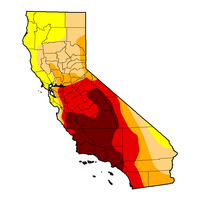 Note: Please click the image for more details, including a map key.

Source: The US Drought Monitor. The U.S. Drought Monitor is jointly produced by the National Drought Mitigation Center at the University of Nebraska-Lincoln, the United States Department of Agriculture, and the National Oceanic and Atmospheric Administration. Map courtesy of NDMC-UNL.

The drought in California affects nearly every community in the state.   (see the US Drought Monitor for a quick overview of the situation).  On the other hand, drought strikes different communities in different ways.

In East Porterville, an unincorporated section of Tulare county, the drought dried up wells and forced residents to rely on bottled water for washing, cooking, cleaning, and drinking water.  In unincorporated communities, residents don't have access to city water lines.  This means that droughts can easily make water totally unavailable for unincorporated communities. Cases like this are a reminder that access to water is dependent not only on conservation efforts but also on quality infrastructure, and is also a reminder that access to water is, unfortunately, often not equal.  Water shortages can exacerbate existing inequalities.

Note: this information is based on a news article published in October, 2015, cited below, and may not reflect current conditions.

The opposing demands of local standards for yard maintenance and water conservation mandates can put homeowners in strange dilemmas.  In April 2016, the Blackhawk Homeowners Association announced that it once again would fine homeowners for failing to keep their lawns in good shape, a policy earlier suspended due to the drought.  This decision followed increased rainfall that helped the drought situation in California.  On the other hand, despite relief from rainfall, California is still in a state of drought, as the US Drought Monitor map illustrates.  As drought conditions become the new "normal" in California and other drought stricken areas, these kinds of conflicts may become more common as communities negotiate long term drought adjustments.